Juggling a marriage, three sons and a dynamic career, Michelle Mulledy was never one to shy away from a challenge. Still, there was one endeavor she never envisioned herself undertaking- public policy. At this year’s 2011 Leadership Conference, Concerned Women for America (CWA) recognized Michelle as the new State Director of New York. But at one point, like many American women, Michelle felt she had neither the interest nor the time for policy.

Everything changed with the 2008 elections, when Michelle quickly realized some of the candidates held liberal agendas that threatened to erode the very foundations of her Christian heritage. Deeply frustrated and unsure of how to defend her values, Michelle felt disillusioned and somewhat powerless. What could she, a typical woman, do to affect the kind of change that would be required? She got her answer one fateful Sunday morning, when she impulsively visited a local church hosting the Rev. Duane Motley of New Yorkers for Constitutional Freedoms. From the pulpit, Rev. Motley challenged the congregation to pay attention to politics and get involved immediately. Instinctively, Michelle knew that God was calling her to take immediate action.

That night, Michelle scoured the Internet for women’s public policy groups. CWA’s website was right at the top of links returned. She browsed the CWA website and learned of the key role CWA members played in her own state and across the country. Feeling prompted almost instantly, Michelle called Anne Downey, former CWA State Director of New York. After an hour-long phone conversation, Michelle was presented with a brand new challenge – stepping into the role of CWA Legislative Liaison of New York.

By faith, Michelle leaped out of her comfort zone, accepted the position and headed to New York’s state capitol. Later Michelle confessed, “At the time I knew nothing. I literally didn’t listen to the news. I remember walking to the Capitol and thinking to myself, What am I doing here?” Despite Michelle’s unease, she “learned the ropes” of New York’s legislature, networked with her local representatives and achieved tremendous confidence and success. 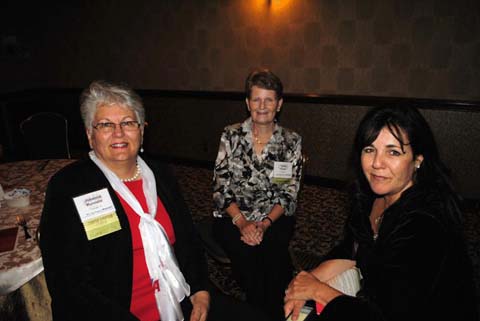 Michelle’s recent guest interview on The Light, a New York Christian radio station, served as a testament to her growth in courage and accomplishment. She seized this incredible opportunity and boldly discussed pro-homosexual New York legislation. She called on fellow believers to stand with her to defend their faith. Michelle told CWA, “I’m naturally a shy person. But after the interview, my husband looked at me and said, ‘Who are you?'”

Michelle took another faithful step of action this past February and became CWA’s new State Director of New York when former State Director Anne Downey felt called to other ministry. Since then, she and CWA of New York members have been working tirelessly to fight the homosexual agenda rampant in their state legislature. Though some battles have been lost, Michelle knows the war rages on. “I believe God is speaking to me and confirming in others that we need to educate the people,” she said. “The average person is not aware of what’s going on when they step into a voting booth. It’s not about Republicans or Democrats. It’s about the values the Bible gives us. America was founded on Godly principles but we’re moving further away from them.”

Michelle encourages all women – and like-minded men – no matter how apathetic they may seem toward public policy, to join organizations like CWA that equip citizens with the knowledge, resources and prayer necessary to defend the Biblical values our great nation was founded upon – and preserve them for our posterity.

Will you, too, accept the challenge by joining the ranks of CWA as we boldly defend our moral and religious freedoms? To find out more about CWA, please visit our website, ConcernedWomen.org. To find out more about CWA in your state, click here. To support CWA financially, please click here today. To help support Michelle Mulledy’s efforts in New York State, click here and use the state box on the right to select New York: simply write a note in the comment box.