Kavanaugh: calm in the midst of chaos

Walking into the atrium of the Hart Senate Office Building the first day of Judge Kavanaugh’s confirmation hearing was absolutely not what was expected. It’s just a year and a half past the confirmation hearing of Justice Gorsuch which was pivotal and exciting in its own right, but largely uneventful.

This go around has been a whole different story. Tuesday morning saw the Hart atrium full of protesters. Purple NARAL shirts swarmed the halls, and people with Planned Parenthood buttons and signs gathered around the media while women dressed as handmaids stood silently and strategically throughout the building. Not long after arriving the whole room went silent. Everyone huddled in a circle, and the crowd turned on electric candles and held them up while the Executive Vice President of Planned Parenthood began a vigil mourning the supposed loss of women’s rights at the hands of Judge Kavanaugh. 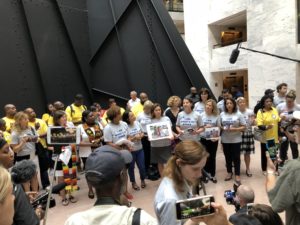 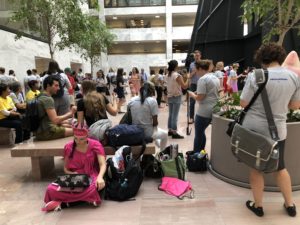 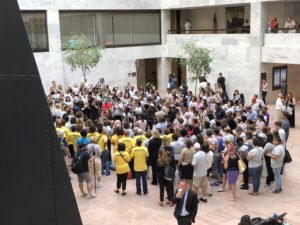 CWA was there taking videos, pictures, and doing media interviews. We were not there to engage in antics and fear tactics but to professionally engage about the issues and the facts at hand.

Concerned Women for America had very specific goals for these hearings: we were there to show support to Sen. Grassley, Judge Kavanaugh, cover that room in prayer, and be a voice of truth to the media at every opportunity.

There was not a moment of this hearing that didn’t see at least two CWA staff or members inside the hearing room. During some of the more intense sessions, we made sure to have even more people there to support and pray. Late Wednesday night was the first opportunity Sen. Booker (D-New Jersey) and Sen. Harris (D-California) had to question Judge Kavanaugh, and they did not hold back. We had nine staff and members of CWA burning the midnight oil with the Judiciary Committee. The room was audibly astonished at their behavior towards the Judge, especially during Sen. Harris’ time. 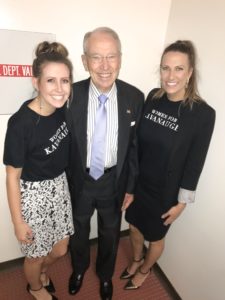 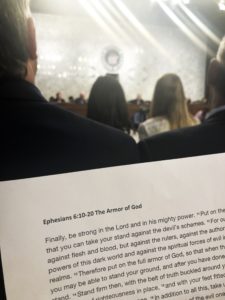 On Thursday afternoon, Senator and Judiciary Committee member Tillis (R-North Carolina) noted that up to that point, there had been over 200 interruptions from the public listening section at the back of the room.

And those protests paled in comparison to what was happening in Sen. Grassley’s (R-Iowa) office.  On Thursday morning, CWA’s Communications Coordinator, Annabelle Rutledge, and Iowa State Director, Tamara Scott, were at Sen. Grassley’s office when a group of protesters came in yelling, chanting, and waving cameras. From 9:00 a.m. to around 4:00 p.m., they held a sit-in. His staff had to go in the back of the office to continue working as the protesters took over behind the desks. They brought lunch, bringing groups of people in shifts to make sure the office was full throughout the day.

Annabelle was inside trying to take video at the beginning of the protest but had her camera blocked repeatedly and was physically blocked from leaving the room as she was called a coward. Most of the media chose to ignore us despite the fact that our Iowa State Director, a constituent of Sen. Grassley was being introduced to them. They chose instead to pull screaming protesters for interviews. CNN told us that they were too busy and didn’t have time for us. It was clear that the facts we had to share did not fit their narrative of hysteria. 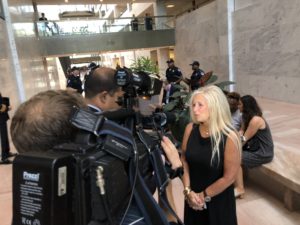 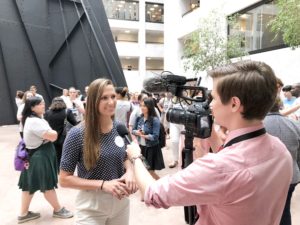 Through the chaos, the hysterics, and the fear tactics, it has been incredible to witness Judge Kavanaugh throughout this week. On Wednesday, he sat through more than 12 hours of intense questioning. Thursday was more of the same, even going into a third round of questions at night. You would never guess how exhausted he must be by his good spirits, calm demeanor, and insightful, clear, and direct answers. He has held fast to the Constitution and precedent just as his predecessors in their hearings. Democratic Senators’ attempts to make him sound anything but qualified and ready for the task at hand fell flat. His qualifications, his deep understanding of law, his dedication to the Constitution, and his character cannot be hidden.

Thank you to each one of you who have kept up with his hearing and prayed alongside of us.