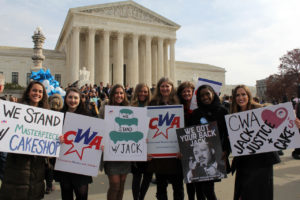 Today was an exciting day at the Justice for Jack Rally while the Supreme Court heard oral arguments in Masterpiece Cakeshop v. Colorado Civil Rights Commission. It was a peaceful but lively morning with a large crowd there to show support for Jack Phillips, Masterpiece Cakeshop, and religious freedom. Almost every member of the CWA staff was able to be there with signs, including some CWA people from out of state!

It was my honor to represent each of you and your support for Jack today as I spoke at the rally. Here is part of what I said:

“The question they face is: do men and women of faith still have the right to abstain from an action that merely inconveniences another based on their view of what the Bible tells them to do?  In this particular case, should Jack Phillips be forced to use his craft in celebration of a same sex marriage? Is there a compelling government interest that should force a baker to use his God-given talent in a way that violates his conscience?  There is no question that Phillips is a sincere believer.  He willingly serves homosexuals, hosts AA meetings and cares for the poor.  He simply asks to not be forced to bake a cake for a gay wedding.  Based on his faith, he also won’t make cakes for bachelor parties or for Halloween. Let’s be clear, this is not a refusal of service case:  Jack has often served the same couple who filed suit.”

Watch my full statement at the Supreme Court here and a video overview of CWA at the rally here.