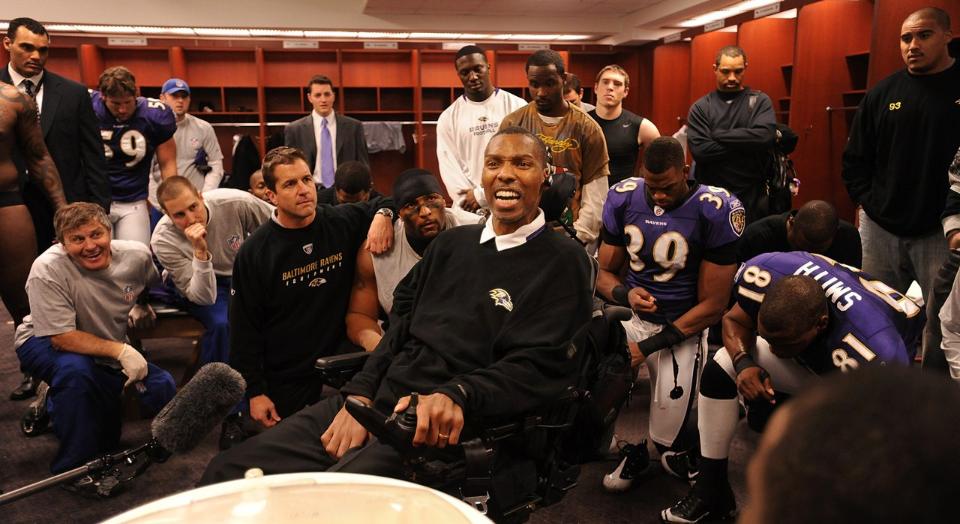 On Tuesday, former Baltimore Ravens linebacker O.J. Brigance testified before lawmakers against a Maryland “right-to-die” measure. The measure, Senate Bill 676, would allow patients with a terminal prognosis of six months or less to get a prescription drug that would quicken their death. In his testimony, Brigance declared that Senate Bill 676 would “devalue the lives and possible future contributions of Marylanders.”

In 2000, O.J. Brigance helped the Ravens to victory during Super Bowl XXXV. Just seven years later, he was diagnosed with Amyotrophic lateral sclerosis (ALS), also known as “Lou Gehrig’s Disease,” which is a disease that attacks the nervous system. As a result of this highly destructive disorder, this former NFL star is no longer able to “take the field”; paralysis has restricted him to a wheelchair. Additionally, Brigance now needs both a ventilator to breath and a computer-generated voice in order to express each of his thoughts. But that hasn’t stopped him from inspiring people — especially the current Baltimore Ravens. Brigance now serves as the team’s counselor, and he continues to work in the Raven’s front office.

After being diagnosed with ALS, most people are given a two- to five-year prognosis; yet, the former NFL linebacker has defeated the odds, and this year will mark eight years since his diagnosis. Brigance doesn’t ignore or diminish the suffering that he has experienced as a result of ALS, and he doesn’t intend to do so for others who are in pain. But, when asked about the trials he’s been through, Brigance responded with this:

“I have experienced times where I have been overcome by the weight of the diagnosis. … But once I dried my tears and stopped feeling sorry for myself, I realized that God had given me the strength to handle this assignment.”

In his testimony before Maryland lawmakers, he stated that the years since his prognosis have been some of the most productive years of his life. He went on to say that,

“The thought that there would be a legal avenue for an individual to take his or her own life in a moment of despair, robbing family, friends, and society of their presence and contribution to society deeply saddens me and is a tragedy.”

Most athletes see being drafted into the NFL as the pinnacle of achievement, but notice that O.J. didn’t say that it was his peak accomplishment. He believes that these past years have been some of the most productive of his life. Brigance had reached “the top” (humanly speaking), and it was still not as fulfilling as his years with ALS have been.

Sometimes it takes suffering to challenge us and sharpen us so we are more equipped to accomplish our true purpose. We learn to rely fully on God, and in doing so, inspire others in the process. According to Brigance, Senate Bill 676 would deny patients of this potentially important time in their lives. The measure would legalize the premature end of the life of someone like O.J. Brigance, who, by God’s grace, has lived years past his prognosis. By denying themselves life, they rob themselves and others of the ability to witness God’s ability to use them in the midst of their suffering or even His healing power.

Sitting idly by while someone robs themselves of that opportunity to create a true and lasting impact is also just as wrong. Physician Assisted Suicide doesn’t just rob the world of valuable life; when we take life and death decisions into our own hands, we also break God’s moral code. I’m sure you’re thinking, “That’s a bold statement to make.” But listen to this: According to sources, “Supporters [of Senate Bill 676] … say the measure is tightly crafted with precautions to give the terminally ill control over when and how they die.”

Do you see what’s twisted about that statement? We humans are attempting to make ourselves little gods. In effect, we are telling the true God and Maker of this earth that we know best when it comes to handling our lives — an ironic notion, since we wouldn’t have lives without Him in the first place. Measures like Senate Bill 676 place life decisions in human hands, supplanting the God of humanity with human gods. God specifically commanded that “you shall have no other gods before Me … [or] make for yourself an idol, or any likeness … on the earth,” (Exodus 20:3-4).

In my pastor’s words, God had a “drop the mic” moment when He made that statement. So why would we allow such a dangerous God-contradicting practice to go on unabated?

I neither pretend to understand the pain and suffering that those who are terminally ill experience, nor do I intend to diminish the agonizing process. We as Christians are called to suffer with one another and to bear each other’s burdens out of our love for God. Yet, in our involvement, we cannot separate ourselves from the fact that Physician Assisted Suicide violates God’s moral law. You can love people well by speaking the Truth into their decision. Today’s hyper-sensitive culture says the opposite: that love is accepting and tolerant of anything and everything. As Christians, we sometimes believe the lie that we must be silent so as not to offend anyone. Yet, God has specifically called us to speak up when something directly conflicts with His Word and reminds us to do so in love.

O.J. Brigance spoke up, and we should follow suit.