“F” is for “Foulmouthed” 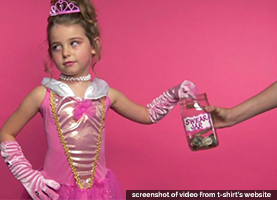 The left is deploying a new weapon in the so called “war on women”: Children.

A recent video produced by an Ohio-based t-shirt company showcases young girls between the ages of five and 10 in tutus and tiaras, using the “F-word” to draw attention to what they say is more offensive than the curse word, namely “pay inequality” and “gender roles.” The video has garnered over 700,000 views thus far and has been a target of response from both sides of the aisle. (Editor’s Note: We’d rather not drive traffic to their site, hence the missing link. However, if you simply must see it, the video can be found via a simple Google search.)

Nothing is worse than exploiting women. We fight daily against the abuse of women in sex trafficking and prostitution, which does, unfortunately, include young women of this age. And that is, perhaps, what is so offensive in this instance. It’s a lighter shade of exploitation, but it’s still leading these girls into a crass situation, feeding them curse words and propaganda in order to turn a buck. Aren’t these girls worth more than that?

Months ago, a toddler in Omaha, Nebraska, was taken by Protective Services after a home video went viral of his parents goading him to curse. Tell me, what’s the difference here?

Apparently, if you think little girls swearing like sailors is offensive, you aren’t a very good feminist.

The video is supposed to raise money, maybe even make you laugh. While it may raise money for the shock-and-awe marketing company, we should all unanimously strike down the thought that damaging a child’s innocence is ever funny.

This is a display of parents not protecting their children from those who are trying to make a buck off of their exploitation. Using children for this kind of message in such a derogatory way is little more than a calculated attempt by a cynical company to deliver its coarse messaging through the mouth of babes. This tactic reeks of the style of attack utilized by the communists in the Vietnam War, sending children wired with explosives among American camps, knowing that the decency of the Americans wouldn’t dare allow them to shoot a child. And it worked. According to Patrick Hagopian, “Americans died and were injured by the booby traps because of their naïve belief that babies would not be used as instruments of war. …”[1]

Yet, in the continued “War on women” children are fair game to the leftists. Shameful.

I am encouraged that there is still enough decency present in American communities to be outraged at this degradation. As a society, we can do better than this and need to rise above the level of “shock value” currently deployed in politics and culture.

[1] Hagopian, Patrick, “The Vietnam War in American Memory: Veterans, Memorials, and the Politics of Healing,” University of Massachusetts Press (2011).