Washington, D.C. – Responding to Liberal Hollywood’s effort to convince women that this election is all about free birth control, Concerned Women for America Legislative Action Committee’s (CWALAC) “Lady Smarts” ad campaign serves as a reminder that women will be thinking about jobs and the economy as they cast their ballots. CWALAC CEO and President Penny Nance is promoting the “Lady Smarts” theme through a video and #ladysmarts social media graphics, highlighting the fact that women are not monolithic voters. 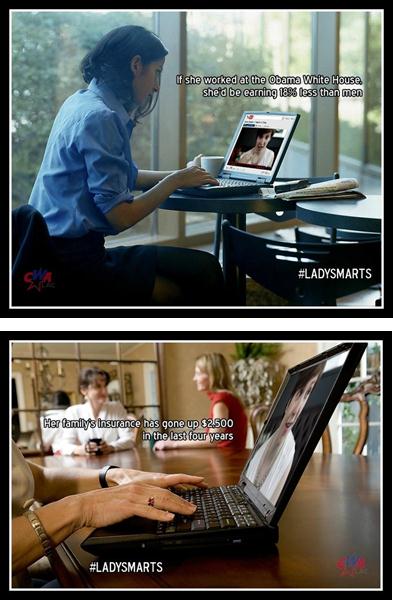 “Hollywood actresses are so out of touch with the issues that affect the average woman in this country,” said CWALAC CEO and President Penny Nance. “Women are concerned about more than their ‘lady parts’ this election; they are concerned about our economy and our national security. They want to protect their religious liberties, which are being taken away by the current administration.”

CWALAC launched the #ladysmarts social media graphics campaign in response to the Liberals’ “Your First Time” video, featuring Lena Dunham, which infers that women are only concerned about free birth control. The following are the latest “Lady Smarts” social media images:

In response to a web video by liberal advocacy group MoveOn.org, CWALAC unveiled the following ad which speaks the real voice of women and clarifies the real record of conservatives.

The following is text of the ad:

I want to talk to you about women …

You know, the ones with the personal stylists, a three-bedroom wardrobe, and so into themselves they actually think they speak for all women.

In a recent ad, some of them tried to scare women by saying that Romney wants to “overturn” Roe v. Wade.

Have they ever heard of the separation of powers? Presidents don’t overturn Supreme Court cases.

But I’ll tell you what they can do. They can make sure these Hollywood elitists don’t succeed in making those of us who actually value human life, including the unborn, pay for another woman’s abortion.

[TEXT] Vote your conscience. [TEXT] Do not let Hollywood manipulate your vote! [TEXT] This message brought to you by Concerned Women for America Legislative Action Committee,www.cwalac.org

Below are the first images in the “Lady Smarts” series:

All images can be found at the link below: http://www.cwalac.org/article_1211.shtml.

If you would like to schedule an interview with CWA CEO and President Penny Nance please contact Alice Stewart at alicestewart1@msn.com or 202-365-5654.

Concerned Women for America is the nation’s largest public policy women’s organization with 500,000 participating members across the country, over 450 Prayer/Action Chapters and Home Teams, 600 trained leaders and over 30 years of service to our nation.