At the invitation of the local 40 Days for Life committee, Concerned Women for America (CWA) of Maine held a one-hour prayer service on March 27, 2013, at Augusta Family Planning. Led by CWA member Dorothy Herbert, they centered their prayers on God’s love for all of those involved in abortion. 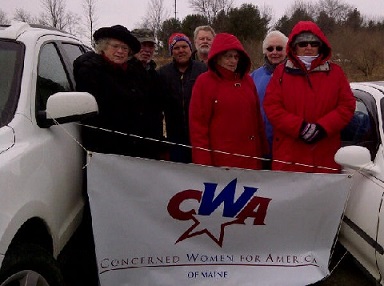 The day was rainy and cold, and there was an invariable strong wind on Gabriel Drive, the dead end street where Augusta Family Planning is located. Unlike most abortion facilities, the building is set back from the road, surrounded by a landscaped mound of earth, and guarded by a sliding gate. Those in attendance stood across the street or walked the public street as they prayed. Unless a car stopped, there was never an opportunity to talk to the occupants or give them literature. In most cases, drivers looked the other way and stepped on the gas as they entered or left.

As an introduction, Dot prepared comments and prayers about the abortionist, the workers, the women seeking an abortion, the children being aborted, the men who father the children, and the families involved. Each prayer participant read one of the paragraphs, and then the group prayed as the Holy Spirit led. Here are some of the highlights. Consider praying these same prayers for the abortion clinic near you.

The abortionist. God loves and had a plan for the lives of each of the abortionists. Perhaps it was to be a famous surgeon. But the devil tricked them, enticed them with easy money blood money. Pray for the abortionists’ hearts to soften, for them to leave their employment and become strong spokespersons against their former occupation.

The workers. Some workers in abortion clinics are blinded, not really understanding what is done in other parts of their facility or believing sincerely that they are helping women. Pray for their eyes to be opened and for them to see the truth of what is happening and find other gainful employment.

The women. Women having abortions are never joyful about the experience; it is normally a very difficult decision. In Maine, as in many other states, they are not told the emotional and physical consequences of their decision and aren’t fully informed of alternative choices. They often have little knowledge of the procedure they will undergo or the stage of fetal development. Pray for emotional healing for those who have had abortions and for women contemplating abortion to learn the truth, decide to let their child live, and avail themselves of available help!

The fathers. Some fathers through their selfishness or ignorance urge the woman to have an abortion. The blood of the innocent is on their hands and many realize years later what they have done, and it causes them much trauma and pain. Other fathers may not want the woman to have an abortion but have little or no say in the matter. Pray for fathers, that they would come to know the loving Father who sees their anguish and is ready and willing to forgive.

“A battle-tested leader who stands by his convic

We didn’t travel all around the country on a big

Join us for our last She Prays She Votes 2022 roun