By Rachel TaylorFebruary 4, 2014Defense of Family, News and Events, Virginia 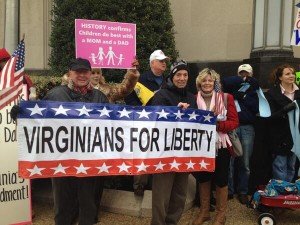 AG Herring broke the oath he took to defend the Constitution of Virginia only 12 days after taking office by announcing that he would not defend the state’s constitutional definition of marriage and that he would change sides to actually challenge it. 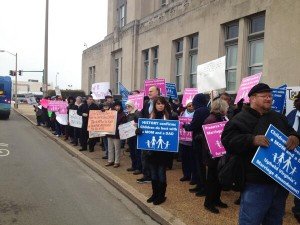 Back in 2006, 57 percent of Virginians, including Mr. Herring, voted to support the Virginia Marriage Amendment defining marriage as the union between one man and one woman. But today, Mr. Herring is singing another tune by asking the court to declare it unconstitutional.

Today, CWA joined hundreds of marriage supporters to stand for marriage and let AG Herring know he has betrayed the trust Virginians placed in him. CWA’s Communications Director, Alison Howard, was joined by Family Research Council Action’s Josh Duggar, Victoria Cobb from the Family Foundation, and E.W. Jackson, founder of S.T.A.N.D. Together, they held a press conference outside the court house to remind Herring that when he took the oath to uphold the Constitution, he swore to protect it in its entirety, not just the parts that he likes. 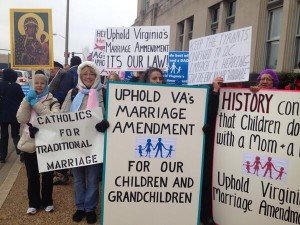 Howard had this to say at the press conference:

“We stand in front of this courthouse today in support of marriage and the rule of law. … By choosing, not only to cease to defend the state constitution, but actually changing sides to go against it, Mr. Herring has betrayed the very people who elected him to office. The same Virginians who gave him their trust with their votes, voted to define marriage as the union of one man and one woman. And actually, more people voted for the marriage amendment than voted for Mr. Herring.”

Herring should not be using the power of his office to impose his views on all Virginians. Whatever your view of marriage, everyone should be against this type of abuse of power. We need everybody to stand with Virginia and help us preserve the rule of law and the sanctity of marriage between a man and a woman.

Please call Herring’s office at (804) 786-2071 and tell him how disappointed you are to see him break the oath he took to defend the Constitution of Virginia. Tell him that whatever his personal views on marriage may be, he should not be pushing his own agenda over the will of the people.

Be sure to share CWA’s video about AG Herring far and wide. We want everyone to know what is happening in Virginia.