Commemorating the 75th Anniversary of D-Day 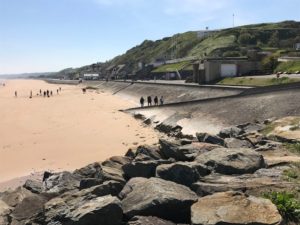 Having been born on June 6, D-Day, I have always had an affinity for that day in our history.  This year during the 75th anniversary year of D-Day, I was privileged to stand on Omaha Beach and Utah Beach where thousands of U.S. troops landed, and many died, to begin the liberation of Europe.  As you look at the pictures from that day, you see the young faces and realize that these were young men who willing made the decision to go into battle knowing that they might not return.  But yet they appreciated and loved the freedoms they had been given, and they were willing to go to a foreign place and protect those freedoms for other people.  I looked at those pictures with sadness knowing the sacrifices that had been made, yet at the same time I wanted to stand up and cheer because of the choices they made, and the results of those choices that we see around us 75 years later not only here in the United States but in France and across Europe.  I praise God for the men of our nation who made those hard choices and went willingly into the fray.  I walked away reminded once again that God has created in men a unique courage that enables them to stand against overwhelming odds and walk into the danger. 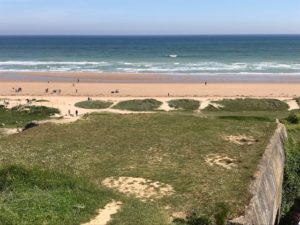 The inscription around the memorial chapel at the American Military Cemetery at Omaha Beach says it so beautifully: “These endured all and gave all that Justice among nations might prevail and that mankind might enjoy freedom and inherit peace.”

Thank you, Lord, for men and women, past and present, who will stand in harm’s way to protect the freedoms that You have given to us.

“It is foolish and wrong to mourn the men who died.  Rather we should thank God that such men lived.”  General George S. Patton