Caught in the Planned Parenthood Trap

By CWALAC StaffMarch 14, 2011Sanctity of Life

Editor’s Note: The following article was published by Fox News. Click here to read it. 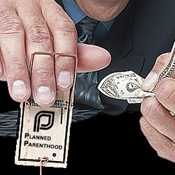 A working family sitting down to dinner somewhere in Middle America would likely find it simultaneously humorous and depressing when learning how difficult it is for Congress to cut off taxpayer funding for a program that no longer deserves it. You can just picture mom and dad rolling their eyes as they contemplate the contrast between how they as a family handle their budget and how Congress makes decisions about the country’s money.

Every morning this week, mom and dad have awakened to another 5 to 10 cents more for a gallon of gas, with no end in sight. The economy is bad, jobs are scarce, bills need to be paid, and prices for everything continue to rise sharply. And yet, they make decisions to keep their family provided for; if there is something the family can no longer afford to do, then they cut it off.

So Middle America’s bewilderment at Congress is perfectly justified, especially in the case of Planned Parenthood. From where I sit, the organization has been exposed as simply a provider of abortions for any reason, no questions asked, no matter the circumstances – even though federal law explicitly states taxpayer money must not go toward financing abortions.

Despite the supposed urgency to roll back spending given a $1.6 trillion budget deficit and a national debt of $14 trillion, negotiations to keep the government in operation have yet to include zeroing-out this pet liberal entitlement. As I write, Congress is in the midst of negotiating yet another “continuing resolution” to keep the government in operation for another few weeks and spending cuts will be included. Conservatives view cutting Planned Parenthood as non-negotiable. It must be done. Period.

With one-third of its $1.1 billion annual budget coming from taxpayers, and given its own reported performing of over 324,000 abortions per year, simple math proves Planned Parenthood’s claim that taxpayer money doesn’t finance abortions appears to be divorced from reality. For every abortion, Planned Parenthood needs to: a) pay salary and benefits for someone to perform the abortion along with support staff, b) pay for equipment and maintenance, and c) pay for insurance to cover everyone and everything. For this alone, Planned Parenthood should be cut off, but there is more.

Planned Parenthood has been exposed as an organization that seems to wink and nod at sex traffickers – as long as they pony up the money for testing, birth control, and abortion – as well as a sanctuary for statutory rapists. Underage and pregnant? Boyfriend is significantly older? Want an abortion, no questions asked, no cops? Planned Parenthood seems to say, we’ve got you covered.

Got a stable of underage girls making good money for you, but you need to keep them healthy and keep them from getting pregnant? Need abortions for the girls who have gotten pregnant? All with no questions asked, no cops? As long as you’ve got the cash (no paper trail, please), Planned Parenthood, once again, seems to say, we have you covered.

Yet it’s very possible Congress could take all year trying to zero out hundreds of millions of dollars in annual funding for this clearly corrupt organization, and it may not be able to do so at all. This sounds preposterous given our $1.6 trillion deficit, our $14 trillion debt, and our tens of trillions in mounting entitlement liabilities. Even more preposterous is that Planned Parenthood reported turning a $63 million profit in its last annual report — even though it enjoys non-profit status.

Yet there are Republicans and Democrats in Congress who will still vote to send money we don’t have to corrupt organizations that don’t deserve it and don’t need it. These members of Congress believe there will be no price to pay for such recklessness with the public’s money.

If you are reading this right now, and you are infuriated, Congress doesn’t believe you will do one earthly thing about it. They believe the 2010 elections were a fluke, that citizens across the country had a momentary temper tantrum and will stop paying attention to Washington’s bizarre ways.

Many Americans, only now, are realizing how large and teetering our government has become, and how indifferent, even ignorant, Congress has become toward those who pay their salaries. If Congress cannot cut off Planned Parenthood this year, given fiscal realities and the organization’s proven corrupt nature, then how will they tackle true budget busters such as entitlements?

If moms and dads can make these decisions every day, why can’t Congress?