All-Out ‘Equality’ in the Military Is an Ideological Fallacy 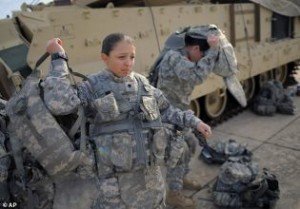 The GOP candidates were prepared for anything the moderators might throw at them at last week’s debate in New Hampshire. From immigration to what toppings Megyn Kelly likes on her pizza, they were ready. But when asked about whether they agree with instituting a female-integrated draft, they started to squirm. The question arises since,in 2015, the Defense Department officially extended women the opportunity to occupy all combat jobs. While contentious, Marine Corps Commandant Gen. Robert Neller and Army Chief of Staff Gen. Mark Milley stated before the Senate Armed Services Committee on Tuesday that women should be forced to register with the Selective Service.

These leaders made a point — but in a way, it was the opposite of what they’d intended. By ceding to feminist pressure, they resurfaced the dangerous prospect of sacrificing military readiness in the name of “total gender equality.”

Click here to read the rest of this article on CNSNews.com.