A Democratic Lack of Hearing in the Planned Parenthood Hearings 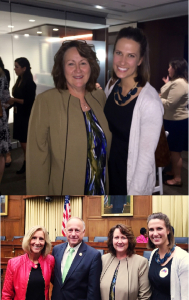 I recently had the privilege of attending the House Judiciary hearing concerning Planned Parenthood’s abortion procedures and medical ethics. It sounds odd to say “privilege” about anything concerning such a heartbreaking topic, but my analytical mind thrives on the opportunity to hear both sides to a story. It helps me form my opinions and often strengthens my arguments. Yet, I found myself frustrated as I listened to so many of the Democratic Congressmen banter on about their political agenda rather than asking viable questions of the panel testifying — an effort I can only assume was to avoid discrediting their own talking points.

Considering the title of the hearing, “Planned Parenthood Exposed: Examining Abortion Procedures and Medical Ethics at the Nation’s Largest Abortion Provider,” the panel was highly qualified to answer any questions from Congress concerning the matter. Nonetheless, the left fought diligently to ignore the truth as much as possibly by simply making assertions rather than asking questions. They threw softballs to Miss Fredrickson (a Planned Parenthood supporter) and belittled the other three, while trying to discredit their firsthand experiences.

Dr. Levatino gave a detailed description of several abortion procedures, some of which imply unethical medial practices which we know are performed by Planned Parenthood. The left alleged his expert testimony was not relevant simply because he had not worked in a Planned Parenthood for the entirety of his career.

Miss Stoltenberg shared her traumatic experience with Planned Parenthood – which left her depressed, in pain, and unable to bear children. She also had stacks of testimonies from women also hurt by Planned Parenthood. The left said it was “too bad” she  had “problems to deal with,” but Planned Parenthood was essential to women. (How insulting!)

Miss Thayer spoke of the Medicaid fraud to which Planned Parenthood is party — something she knows firsthand from working there. The left said she couldn’t speak to Medicaid fraud because she wasn’t a finance lawyer. Miss Thayer also shared multiple stories of harrowing, unethical practices performed in Planned Parenthood clinics. Still, the left continued to tout that “no one on the panel” had brought up any illegal practices.

Despite the efforts of the Democratic side, the panel members did what they came to do; they shared truth every moment they could. Congressman Steve King (R-Iowa) spoke with the panelists after the hearing and encouraged them by sharing that he doesn’t normally see such heated discussion. King said you know you’ve done something right when you get the other side riled up. The fact that the Democrats fought so hard to discredit the testimonies shared speaks to the power their words have. Let’s keep the conversation going.

Janae Stracke serves as Communications Coordinator for Concerned Women for America. Follow her on Twitter at @JanaeStracke.