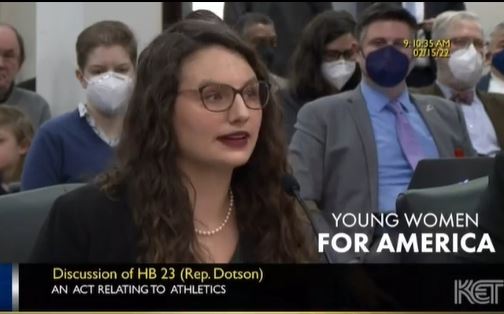 Washington, D.C. – Today, Young Women for America (YWA) Kentucky leader Halli Gravely testified before the Kentucky legislature in support of the Kentucky Fairness in Women’s Sports Act (H.B. 23). This Act would prohibit male students from participating in girls’ athletics. Gravely, a high school swimmer, spoke on behalf of Concerned Women for America Legislative Action Committee (CWALAC) who has been fighting to protect women’s rights to fair play in sports.

H.B. 23 protects girls’ sports by making sure that biological males cannot compete in girls’ sports. Ten states have passed protections for girls’ sports while ten other states, like Kentucky, are debating this issue.

“Women’s and girls’ sports are under attack,” said Annabelle Rutledge, National Director of YWA who attended the Committee hearing today. With all of the national news around the discrepancies in high school and college athletics, it is important to speak up and protect a woman’s right to a fair playing field.”

Lia Thomas, a swimmer at the University of Pennsylvania who is a biological male, has drawn national attention to the issue of men competing in women’s sports. Thomas has set records competing against girls and has been cleared to compete in NCAA women’s tournament. Thomas will also be competing in the Ivy League Swimming and Diving Championships this week where the swimmer is seeded first in three events.

“Young women should not be forced to compete against young men,” said Penny Young Nance, President, and CEO of CWALAC. “Biology does not lie, and science is clear, men and women are different, and men have a clear advantage over women in sports. We feel for these girls who have been tossed aside by schools who just want to win.”

HOW: For interviews or additional information, please contact Katie Everett, Press Secretary at 571-420-2488 or at [email protected].

###
Concerned Women for America is the Nation’s largest public policy organization for women; we are dedicated to promoting Biblical values and Constitutional principles. More information is available at ConcernedWomen.org