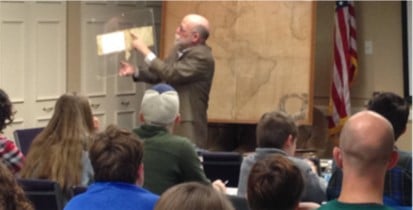 Liberty and Property
American Colonization and the Founding of a Nation

Author and speaker Dan Ford will recall for us the foundational contribution of Christianity in the historic struggle for constitutional government as well as the cause of religious and civil liberty. He will unfold America’s genuine cultural inheritance and to demonstrate by way of facts and artifacts that modern caricatures of our nation’s history often prove to be misrepresentations that run counter to a rich, robust, and well-documented past.

He will also cover the rise of Socialism and how it’s antithetical to the principles of our nation’s founding (including the love of freedom that carried us through the Cold War.)

An avid collector of artifacts and historic documents, Dan Ford delights in using his original source documents to demonstrate the abundant evidence of our Godly cultural inheritance. Dan is the author of the illustrated work, In the Name of God, Amen.

Men, women, and teens are welcome and encouraged to attend.

Are you concerned about what we see happening around our country – the social unrest, tearing down
of statues, the increased efforts to rewrite America’s history? Do you want the truth about 1619 America vs. 1620 America? Do you want to know the facts about slavery in America, in the world?

At this critical time in our nation’s history, we invite you to hear David Barton, who has been named “America’s Historian” and who has a personal collection of tens of thousands of American historical documents! David will share the historical perspective of our freedoms and the role God had in creating our great nation.

David is the author of numerous best-selling books, addresses well over 400 groups each year, and Time magazine called him “a hero to millions.” Time magazine named David one America’s 25 most influential evangelicals.

Women, men, and teens are welcome and encouraged to attend!

Reserve your seat now! RSVP at tinyurl.com/y8yexsdo. Reservations close Saturday, January 9, or when capacity is reached.