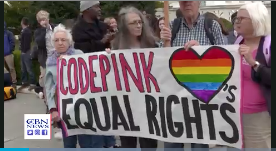 Our CEO and President Penny Nance spoke with CBN’s Paul Strand about the Harris case currently before the Supreme Court about the ramifications for women if the definition of “sex” were to change to include gender identity.

“On Tuesday, the US Supreme Court heard three major cases that could affect a wide swath of the American population.

At the core of these cases is what does the word “sex” means when it comes to law. In 1964, when it first became illegal to discriminate on the basis of sex, it meant “male” and “female.”  Now, at least one side in these cases is arguing it should be a bit more complicated: gender identity and sexual orientation should be included.

The cases involve two homosexuals and one transgender fired from their jobs. Gerald Bostock is one of the gay men.

He said outside the court after his case was heard, “Millions and millions of people go to work every day fearful for being fired for who they are, how they identify and who they love. And that’s wrong.””

Watch the entire video and read the full story here: