Planned Parenthood is not for you. 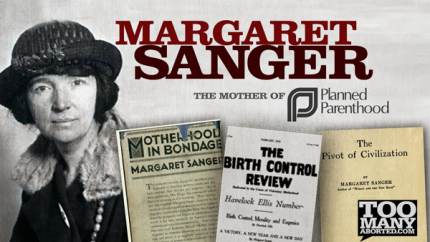 They want your money.
They want abortions in your community.
They want to save face as a health care provider,
when they don’t even provide many services.
They want you to ignore scandal after scandal and keep trusting them.

But there is a better way.  Community Health Centers will be there for you — providing care for a lifetime, or for however long you need.  Care for all your healthcare needs — reproductive and beyond.  The truth is Planned Parenthood is a waste of tax dollars and from the very beginning was built upon flawed foundations.  They have since become the largest abortion provider in America.  We have to face reality.

Planned Parenthood is keeping you down, and has been for 100 years.

You can join us to say:

At your local rally

Founding: Planned Parenthood was founded in 1916 as a birth control clinic run by Margaret Sanger.

The 3% Abortion Deception: Planned Parenthood claims abortion is only 3% of what they do and that their priority is “women’s health care.” But the math does not add up. 94/100 Pregnant Women at PPA have an abortion.

Ratio of Adoption Referrals to Abortions: 1 to 160

Ratio of Planned Parenthoods to Federally Qualified Health Centers: 20 to 1

Disturbing Demographics of Abortion: African-Americans are only 12.6% of the U.S. population but receive 35.4% of all abortions, over 1 in 3.

Racist Donors: Planned Parenthood was recorded disregarding the racist motive for a donation, accepting money “for whatever reason.”

Is Elimination “Help”?: The government is funding Planned Parenthood in a way that just reduces minorities, instead of actually helping them.  As NPR reports: “One of the issues is … what happens when you can find birth control clinics but you can’t find primary care? It’s just a question of what the state’s willing to provide for,” Reverby said. “Was there overuse of birth control and sterilization in poor communities in some states? Absolutely. It’s a complicated story.”

Check back soon for the full schedule.

Educational Videos for 100 No More

The Definition of Human Rights

What is Planned Parenthood Really About?

How to Find Low-Cost Quality Healthcare

What is an FQHC?

Is it Safe? Abortion Risks

Nick Cannon: Can I Live

Let’s work together to DEFEND women and babies and DEFUND Planned Parenthood.

Five Things You Can Do to Stop Planned Parenthood
Let’s get practical in the ways we go about fighting for the pro-life cause.  Commit to daily prayer that abortion would end.  Be ready to articulately defend the sanctity of life.  Volunteer your time, money, and/or expertise to a local pro-life pregnancy center.  And vote for pro-life candidates and support pro-life legislation.

Questions for Cecile Richards
Cecile Richards, the Planned Parenthood CEO, was grilled at the Planned Parenthood hearing, but perhaps not grilled enough. These are questions Cecile should be asked, like, “How can you say on the one hand that abortion is a deep, private, intimate decision between a woman and her doctor, and then say out of the other side of your mouth that a third-party taxpayer should be forced to pay public dollars for that ‘private’ decision?”

The Bottom Line
This poignant video shows the ignorance about Planned Parenthood further bolstered by the intense media bias that devotes more coverage to a dead lion than to Planned Parenthood.  Additionally, Planned Parenthood’s faulty count of “services” can include a 12-month supply of birth control as 12 different services!

#WomenBetrayed Rally
Witness CWA CEO Penny Nance join Kristan Hawkins, and other strong defenders of life in offering a compelling case against Planned Parenthood, an organization that doesn’t protect women, but rather betrays them.

Standing Up to the Biggest Abortion Bully in America
Countering Planned Parenthood at public rallies is an important part of taking down the abortion giant.

To Call “Good” “Evil”
Isaiah 5:20 says “Woe to those who call evil good and good evil, who put darkness for light and light for darkness.”  This, of course, is exactly what Planned Parenthood does as they reject justice, truth, life, love, caring, equality, privacy, and the body by substituting their own warped definitions.

A Democratic Lack of Hearing in the Planned Parenthood Hearings
Janae Stracke reports on the House Judiciary committee hearing concerning Planned Parenthood’s abortion procedures.  The panel questioned included a doctor who previously had performed abortions before changing his path, and also a woman who had been traumatized by Planned Parenthood, standing up for herself and many like her who are hurt — not helped — by the organization.

Anniversary of the Center for Medical Progress Scandal
A year later, reflect back on the cultural reactions to the release of videos that show Planned Parenthood sells baby parts.  Here how the select panel investigative panel is progressing.

Summary of the Center for Medical Progress Videos
We understand that these videos are graphic and may not be suitable for all viewers. However, you must know what’s in them. To that end, and for those who do not wish to watch them, we have provided a summary of the first eleven videos.  They describe when the video was released, its setting, the illegal activity it exposes, and the most disturbing quotes and aspects from each one.

Cecile Richards Lost in Translation
After the first video alone, Planned Parenthood knew they had a public relations disaster on their hands. Cecile Richards, President of Planned Parenthood, came out with a video statement denying the accusations that baby parts are sold.  But she forgot a few words — the real words. The truth.

CWA Joins in Rally to Say “Enough is Enough! We Must Defund Planned Parenthood”
This media statement explains CWA’s stance against Planned Parenthood, who receives more than half-a-billion dollars in federal taxpayer money per year and is profiting off the broken bodies of dead babies.  Penny Nance urges the federal government to follow the example of several brave governors who have defunded Planned Parenthood.

A Rally Point for America
The Center for Medical Progress videos sparked a flame in this country.  Rallies were held across the nation.

Attacks Against CMP and Activist David Daleiden
Unfounded though it is, The Center for Medical Progress has been attacked by Planned Parenthood in an attempt to threaten them into silence.

The Importance of Investigative Journalism
The freedom of the press is harmed by attacking investigative journalists who have played historic and important roles in American history.

Impugn the Court, Not CMP
The integrity of the court’s role in society is harmed in this case, in which shady past records and ties to Planned Parenthood reveal significant bias in this case.

Crouse: Planned Parenthood’s Horrific Ironies Exposed by the Gosnell Trial
Turns out that the horrors of Gosnell’s clinic are also present at Planned Parenthood, who is finally being exposed as the nation’s largest abortion provider.

Judge Refuses Big Abortion’s Push to Interfere with Planned Parenthood Congressional Investigation
The Center for Medical Progress (CMP) has video of the National Abortion Federation (NAF), which NAF didn’t want Congress to see. Judge William H. Orrick, despite his sympathy to abortion, rightly ordered that the videos be turned over to Congress as part of their investigations into the abortion business after the CMP video storm.

HHS Wants to Force States to Fund Planned Parenthood
In another move of executive overreach, the Obama Administration’s Health and Human Services Department put out a claim that would force states to give Planned Parenthood Title X funding due to their other services, while entirely ignoring that Planned Parenthood is an abortion machine.

The Battle May Have Been Lost, But the War is Not Over
Though the president vetoed H.R. 3762, which would have defunded Planned Parenthood for a year, we remain committed to the fight against Planned Parenthood, which performs over 320,000 abortions per year and yet receives over half-a-billion dollars in federal funding.

The 411 on H.R. 3762
This House bill, the “Restoring American’s Healthcare Reconciliation Act” would have been an important step in both repealing Obamacare and defunding Planned Parenthood.  This article explains the act and its relationship to budgeting information.

Cutting the Cord: The Case for Defunding Planned Parenthood
With distortion of facts, racism, financial irregularities, covering up of rape, encouraging teen sexual experimentation, and promoting abortion here and abroad, it is time to release Planned Parenthood from the protective womb of the federal government, which is funding them millions and millions of dollars annually.  This extensive report by Janice Shaw Crouse, Ph.D., is an academic and well-researched case against them.

Concerned Women for America Legislative Action Committee Increases Pressure on Congress to Defund Planned Parenthood
Ads in eight states aired to explain the case against Planned Parenthood, generating strong grassroots support against the organization. This comes in the wake of videos explaining their aiding of sex trafficking: “If they’re fourteen and under, just send them right there if they need an abortion.”

The Fall of the House of Sanger
Penny Nance traces forces behind the pending collapse of Planned Parenthood and the pro-choice position mostly given the impact of technology.  With Lila Rose and Live Action’s work, people have become more and more uncomfortable with taxpayer funding of Planned Parenthood.

Abortion Advocates Plumbing the Depths for Donations
Despite the fact that Planned Parenthood receives federal funding, they apparently fundraise, too — for Mother’s Day!  Apparently you can make a donation to Planned Parenthood in honor of your mother.  How disgustingly ironic.

Defending Planned Parenthood is Blindness
Penny Nance defends unborn lives on Fox News, while CWA exposes that those who support Planned Parenthood are turning a blind eye towards the facts — like the $1.4 million in federal funding per day and the $127 million surplus of their organization.

Patrina Mosley Stands Against Honoring of Racist Eugenicist Margaret Sanger
Patrina Mosley stands with many other pro-life activists to protest the bust of Margaret Sanger [the founder of Planned Parenthood] at the National Portrait Gallery: “It is appalling that Margaret Sanger, the very woman who succeeded in inventing the black holocaust, will now be honored among those who spent their lives for true justice for the African-American.”

Don’t Put Abortion Activist Margaret Sanger or Pro-Abortion Feminists on the $20 Bill
The proposal to change the $20 bill in the year 2020 to honor the face of a woman has caused many surveys asking who should be chosen.  The problem?  Heroes like Clara Barton and Susan B. Anthony are put alongside radical feminist and Planned Parenthood founder Margaret Sanger.

The Negro Project: Margaret Sanger’s Eugenic Plan for Black Americans
It is important to trace the origins of Planned Parenthood back to its founder, Margaret Sanger, a eugenicist who wanted to purify the race and exterminate the black population.  Years later, abortion is used to do just that, but some African-American leaders are finally fighting back.  This is an important and comprehensive factual resource for all those desiring to untangle the web of deception that is abortion, eugenics, and Planned Parenthood.

Margaret’s Legacy
Margaret Sanger is the founder of Planned Parenthood.  Her anti-religious, adulterous, eugenicist ideologies shine a light on history that can illuminate the present.  Though she saw children as draining the life out of their mothers, her neglect of her own children eventually led to some regret.  But instead of repentance and reconciliation, Margaret’s life was a downward spiral.