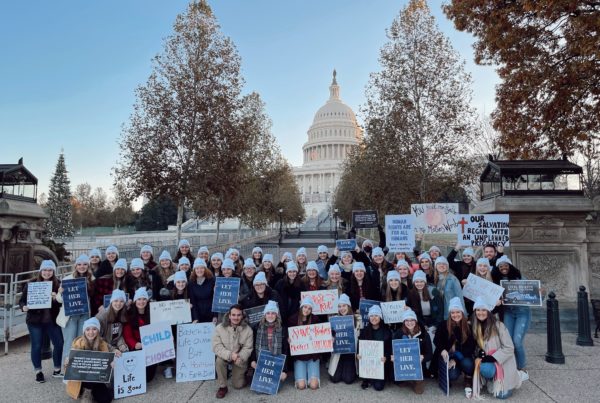 After historic arguments at the Supreme Court, Roe v. Wade’s future is in doubt 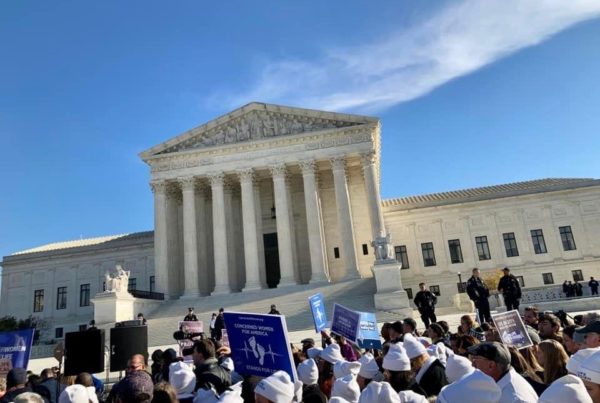 Today, the United States Supreme Court heard oral arguments on the most important pro-life case of our lifetime: Dobbs v. Jackson Women’s Health Organization. As hundreds of pro-life supporters rallied outside the… 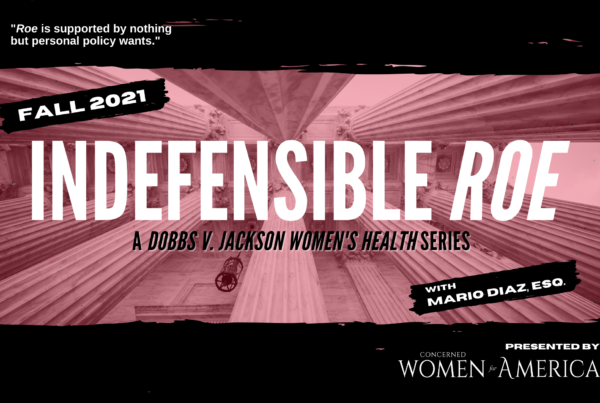 Having established that “The Constitution does not explicitly mention any right of privacy,” as the Court accurately noted in Roe, and that the Court relied on that virtual right to further invent another constitutional “right”…

On the Maine Vaccine Mandate Case Before the U.S. Supreme Court

In a recent emergency application before the United States Supreme Court, the justices declined an appeal from Maine health care workers to stop the enforcement of a vaccine mandate that did not contain a religious exemption. Though certainly disappointing, those concerned with these oppressive vaccine mandates should not read much into the denial, and indeed should be encouraged by Justice Neil Gorsuch’s excellent discussion of the legal principles involved which Justices Clarence Thomas and Samuel Alito joined.

It was disappointing that Justices Amy Coney Barrett and Brett Kavanaugh declined to hear the case, but we should note their denial was a technical one as to the timing of the appeal. “[D]iscretionary consideration counsels against a grant of extraordinary [emergency] relief in this case, which is the first to address the questions presented,” wrote Justice Barrett. Practically all she wrote in her one-paragraph concurring opinion.

The bottom line is that the Supreme Court will end up taking one of the many cases challenging these vaccine mandates soon, and I am extremely confident that, at the very least, a religious exemption will be required.

Any government or private entity taking action against a worker’s request for religious accommodation does so at their own peril, putting itself at serious risk of legal liability once these cases work themselves out which will not take long, given how aggressively the strong arm of government is seeking to assert itself.

Not even a week after the Supreme Court’s denial in this case, the United States Court of Appeals for the Fifth Circuit blocked the Biden administration’s latest mandate. “Because the petitions give cause to believe there are grave statutory and constitutional issues with the Mandate, the Mandate is hereby STAYED pending further action by this court,” the per curiam (by the court) noted.

There are a lot of moving parts in this battle, so be patient and continue to pray for the judges, the justices, and the attorneys involved. The Biden mandate is to take effect on January 4, so the one thing that we can be sure of is that it will move fast.

I commend to you Justice Gorsuch’s exceptional dissent from the denial of the application for injunctive relief against Maine’s vaccine mandate which demonstrates why we can be confident that religious liberty will win. The government must treat religious exceptions on the same level as any other exemptions. They cannot target religious exemptions as less worthy of protection. “Maine has so far failed to present any evidence,” wrote Justice Gorsuch, “that granting religious exemptions to the applicants would threaten its stated public health interests any more than its medical exemption already does.”

Where many other States have adopted religious exemptions, Maine has charted a different course. There, healthcare workers who have served on the front line of a pandemic for the last 18 months are now being fired and their practices shuttered. All for adhering to their constitutionally protected religious beliefs. Their plight is worthy of our attention.

Indeed. This is why the Court will have to address the issue in the not too distant future. Continue to pray. 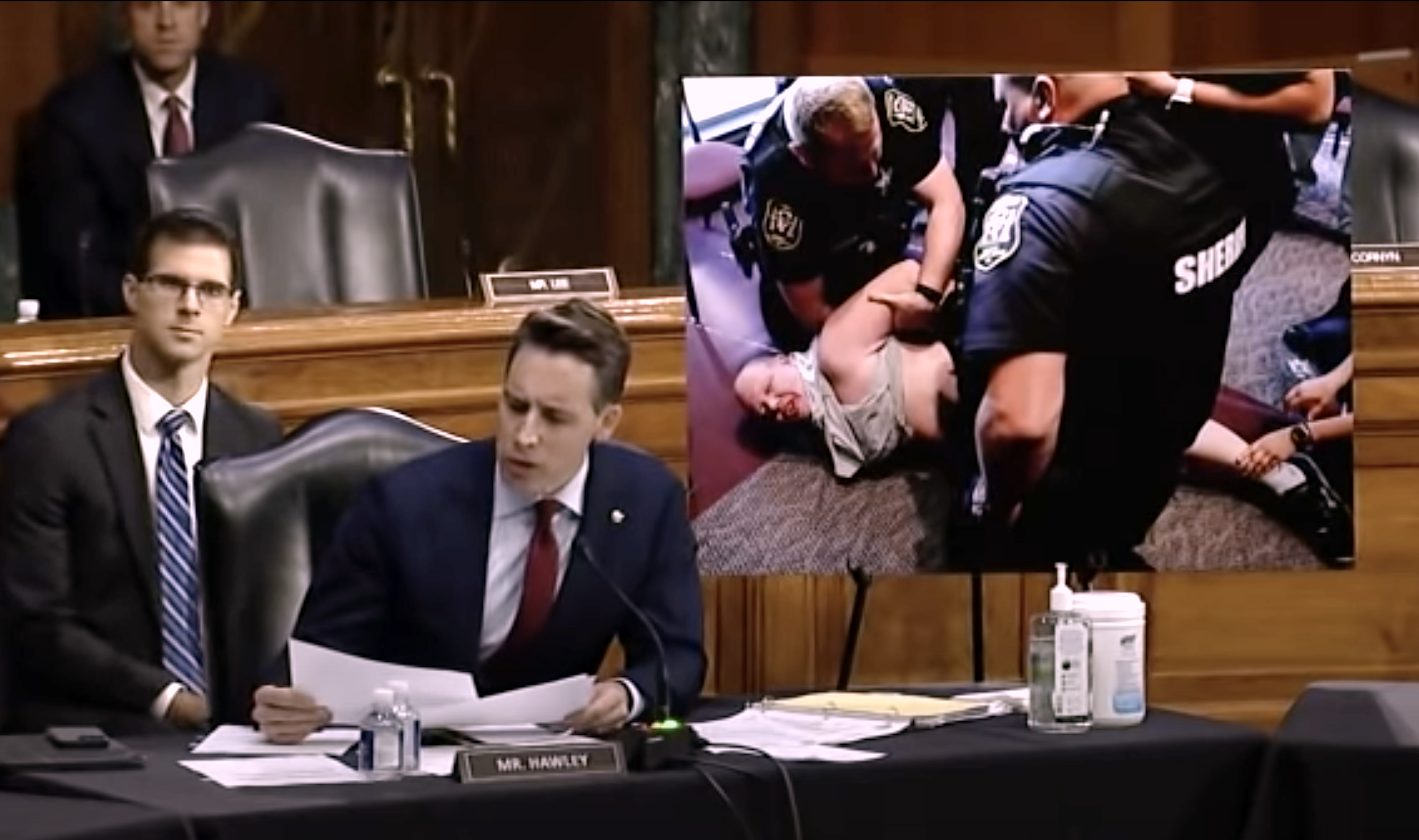 My heart breaks for Scott Smith, the Louden County, Virginia dad whose daughter was raped in a school bathroom by a boy in a skirt, being arrested while protesting at a school board meeting.

He was mercilessly arrested and bloodied up in the process for defending his daughter. I cannot hold back the tears thinking of how he must have felt.

The school district’s superintendent Scott Ziegler claimed that there had been no assault in a school restroom anywhere in Louden County. The dad was painted as a liar and a right-wing extremist as he got agitated.

Based partly on Mr. Smith’s example, the National School Boards Association (NSBA) wrote a letter to President Joe Biden asking him to use the Patriot Act to crack down on these out-of-control parents. They wrote:

“As these acts of malice, violence, and threats against public school officials have increased, the classification of these heinous actions could be the equivalent to a form of domestic terrorism and hate crimes.”

Think about that. You are out there fighting for justice for your daughter, and instead, you get labeled a domestic terrorist.

Five days later, the Biden Administration’s Department of Justice (DOJ), led by Attorney General (AG) Merrick Garland, took immediate action against parents based on the NSBA letter alone. AG Garland sent a memo saying, “While spirited debate about policy matters is protected under our Constitution, that protection does not extend to threats of violence or efforts to intimidate individuals based on their views.” The memo directed the Federal Bureau of Investigation (yes, the FBI) to go after these parents.

Again, DOJ and the FBI were not to focus on protecting Mr. Smith and his daughter; they were to work to suppress Mr. Smith’s efforts to protect his daughter.

But their evil scheme has blown up in their faces. Reports have surfaced of how the school board knew of Mr. Smith’s daughter’s assault, and they concealed it to protect their hideous transgender bathroom policy. They were so negligent that they actually transferred the “transgender,” biological male boy to another school where he assaulted another young woman. A criminal investigation is underway.

The backlash has been so intense that the NSBA has disavowed its letter comparing parents to terrorists, while many of its state members resigned in condemnation.

But the battle is far from over. Believe it or not, AG Garland has yet to renounce his shameful memorandum.

Please pray for this father and against these evil school board policies.