Concerned Women for America joins the world in outrage and sadness regarding the murder, rape and forced prostitution of women and children at the hands of Islamic militants.  This is a war against evil much like described in Ephesians 6:12, “For we do not wrestle against flesh and blood, but against principalities, against powers, against the rulers of the darkness of this age, against spiritual hosts of wickedness in the heavenly places.”

Please join us on Sunday, February 28, 2015, for Prayer and Love >Terror: a Day of Prayer and Fasting for the Victims of Islamic Terrorists.

Prayer and Love > Terror from Concerned Women for America on Vimeo.

For our enemies: that they may have a Damascus road conversion to faith in Jesus and repent of their evil, just as Paul did.For justice to prevail in nations around the world.For victims around the world: women, children and innocent men.For Israel, Jordan and other sovereign nations in the Middle East who are being threatened by Islamic terrorism.    For the leaders of world to stiffen their resolve to fight evil and to stand up for the weak.For our administration: that they will acknowledge the seriousness of the threat of terrorism, take a strong stance against it and once again assume a position of leadership in the world. 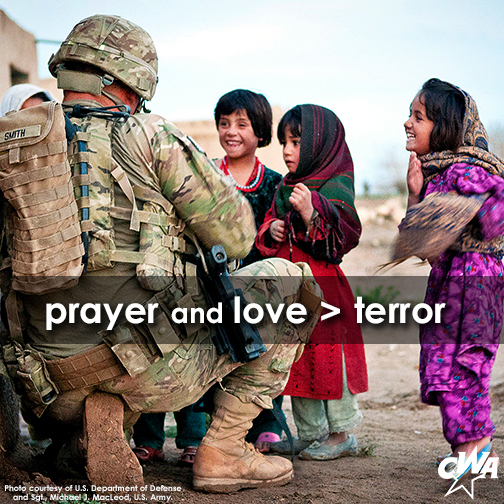 Planning to participate? Let us know.